The Atom Struck Tile: A Representation of Tragedy and Peace 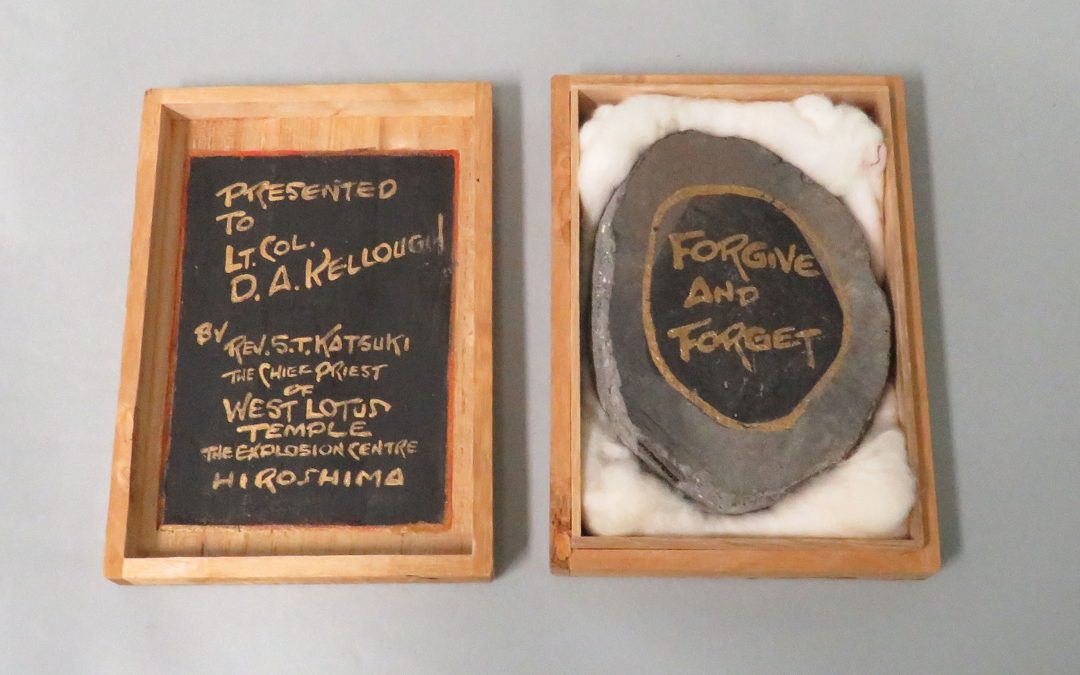 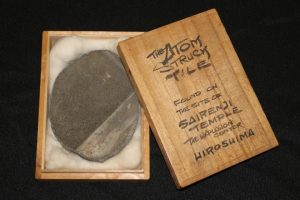 This past week marked the 77th anniversaries of the bombings of Hiroshima and Nagasaki. In commemoration of these catastrophic events, and in conjunction with Archaeology Month, we wish to highlight a relevant artifact in the Diefenbunker’s collection: The Atom Struck Tile.

Derived from the Sairenji Temple in Hiroshima, The Atom Struck Tile serves as a tangible reminder of the tragedy that befell Japan. On Monday, August 6, 1945 at 8:15 a.m., the fear of nuclear energy and its devastating capabilities became a global reality. The first nuclear weapon to be used in wartime was dubbed Little Boy. As it was delivered to Hiroshima by an American B-29 Superfortress bomber, Little Boy fell at an exponential rate, reaching the ground in forty-four seconds and destroying everything in its path that was within a 1.6-kilometre radius. Destruction continued three days later on Thursday, August 9, 1945 at 11:02 a.m., when Fat Man, the second nuclear bomb, was dropped on Nagasaki, a city 300 kilometres from Hiroshima. Falling for forty-three seconds, Fat Man flattened half of the city upon impact.

Having originally served as a roof tile on the Sairenji Temple in Hiroshima, The Atom Struck Tile now resides as an artifact within our museum’s collection. The oval-shaped tile is nestled in white padding and placed at the centre of a rectangular wooden box. The Atom Struck Tile is made of clay and, given the nature of this material, when the tile was “exposed to heat in excess of 6,000 degrees Celsius for one tenth of a second during the atomic bomb’s explosion,” the appearance and texture were permanently changed. For comparison, The Atom Struck Tile was exposed to temperatures five times hotter than what clay typically gets fired at in an average kiln. The effects from the extreme heat can be seen on the back of the tile, where there is a diagonal line on the lower right side that stretches to either end. On the upper half, the texture is rough and the colour is dark grey and brown, indicating that this half was directly exposed to the heat. On the lower half, the texture is smooth with a gradient grey pattern, indicating that this half was more protected from the heat.

While it represents tragedy, The Atom Struck Tile also represents peace. Inscribed in gold on the front of the tile is the phrase “Forgive and Forget.” The text is written in the centre of the tile on top of a black circle that is outlined in gold. Similarly, on the inside of the wooden box, written in gold, on a black background, outlined in red is the name Lt. Col D.A. Kellough, the man who was awarded The Atom Struck Tile in recognition of his efforts in rebuilding the Sairenji Temple. The chosen colours of gold, white, red, and black can represent prosperity, strength, and courage, colours and themes which are seen in our contemporary world through the creative expression and peacebuilding initiatives of the Hiroshima Peace Culture Foundation.

The bombings of Hiroshima and Nagasaki introduced the power of nuclear energy to the world. The cataclysmic impact, and the resulting loss of life, served as distinctive reminders during the Cold War while the threats of nuclear combat continued. Today, we continue to remember and we strive to preserve history as we move towards a more peaceful collective future.

The Diefenbunker: Canada’s Cold War Museum remembers the lives of those who were lost in the bombings of Hiroshima and Nagasaki.

The Concrete Cores of the Diefenbunker: https://diefenbunker.ca/concrete-cores-2022/