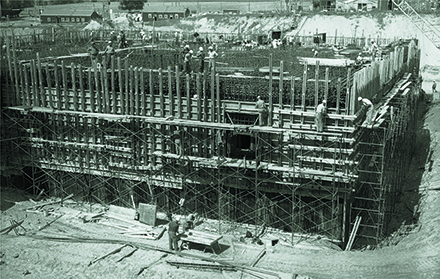 The Diefenbunker was commissioned by Prime Minister John Diefenbaker in 1959, as part of his government’s reaction to escalating tensions in the Cold War. The purpose of the bunker was to house key members of the government and military in the event of a nuclear attack on Canada.

The safety of its nuclear roof would allow the Canadian government to operate safely underground for 30 days in order to assist with the governance and rebuilding of the country. A series of Emergency Government Headquarters bunkers were built across Canada and, as the largest, the federal government bunker would come to be known as the Central Emergency Government Headquarters (CEGHQ Carp).

When building began in 1959, it was a top-secret operation under the code name Project Emergency Army Signals Establishment (EASE). The former Montgomery farm in Carp was chosen as the perfect site for a 75 foot underground bunker: it was within evacuation distance of downtown Ottawa, it was in a natural valley, and it had the ideal geological conditions for protection.

The bunker was designed and engineered by the Foundation Company of Canada, and the project was led by LCol Ed Churchill. The entire construction process took less than 18 months, and was the first recorded use of critical path construction methodology in Canada. The bunker is 100,000 square feet over four levels. It is made of 32,000 cubic yards of hand –poured concrete and 5,000 tons of steel. It is an extraordinary marvel of engineering, and built to withstand a 5 megaton nuclear blast from 1.8 kilometers away.

The site was completed and began operation in 1961, and remained in continuous operation until it was decommissioned in 1994. During those 32 years, it was also Canadian Forces Station (CFS) Carp, with a staff of 100-150 people and a 24-hour shift rotation. It was the site of some of Canada’s most top-secret communications throughout the Cold War. At all times during its operation, the cupboards and pantries were stocked with enough fresh food and rations to feed 535 people for 30 days and the building was prepared to go into lockdown at any moment.

The Diefenbunker was given National Historic Site status in 1994, and CFS Carp was closed the same year. The building remained empty until the foundation of the museum in 1997.

Take a look inside the Diefenbunker!

Immerse yourself in stories and artifacts of the past as you explore this once-top secret, four-storey underground bunker, now a museum and national historic site preserving Canada’s Cold War history.