Tracking Temperatures with the Tempscribe Thermometer 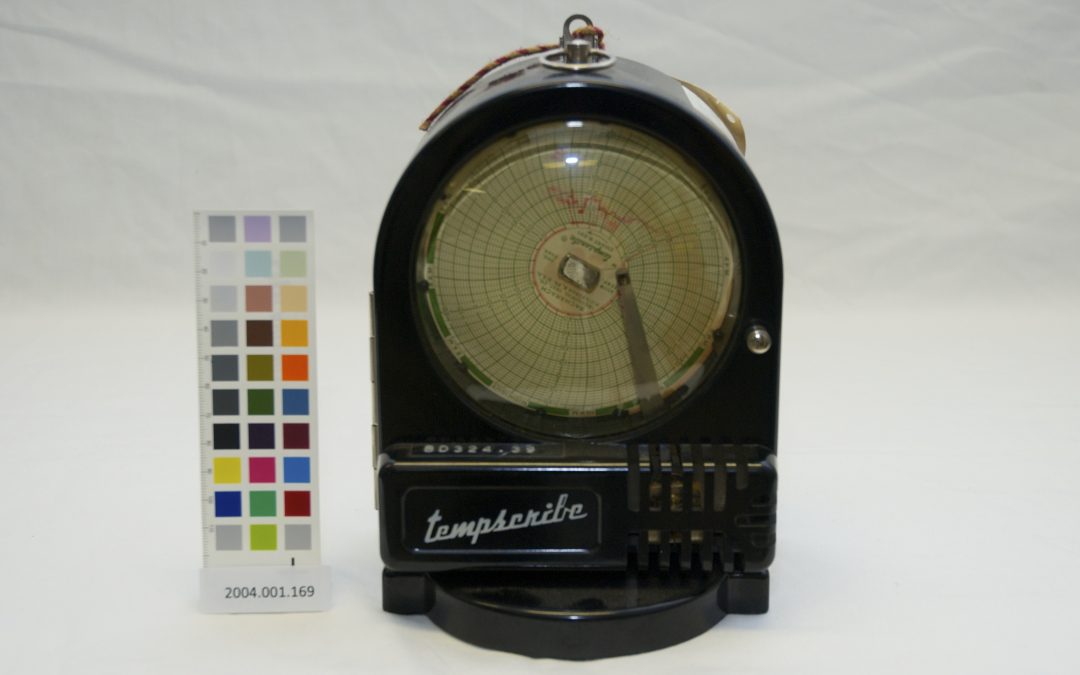 As the weather gets chillier, both outside and underground, we decided that there was no better artifact to feature for the end of November than the Tempscribe Thermometer.

Produced between 1960 and 1990, the Tempscribe Thermometer is a chart reading thermometer that was used to record temperature. Similar chart reading thermometers of this time period were used to record humidity, barometric pressure, and flow measurements of water, oil, and gas. The Tempscribe Thermometer is an artifact that has historical connections to the Diefenbunker, as it showcases the type of equipment that would have been used by personnel at the bunker to gauge the fluctuating temperatures underground during its 32 years of continuous operation between 1961 and 1994.

The bunker was the site of some of Canada’s most top-secret communications throughout the Cold War. During its operation, the cupboards were stocked with food at all times and there were 100 to 150 staff members who operated on a 24-hour rotation. Given this, as the bunker housed many important documents, people, as well as food, it was imperative that it was temperature-controlled. Regularly recording the temperature helped to avoid deterioration of any kind. This remains true today — the Diefenbunker is home to hundreds of Cold War artifacts, and is an artifact itself, therefore temperature and humidity readings are still recorded in the bunker. 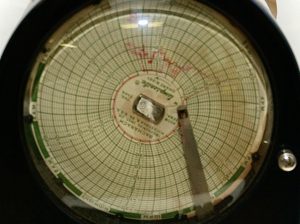 The Tempscribe Thermometer is a black cylindrical unit with a square base that has “Tempscribe” written in white text diagonally across the lower left half of the unit. In the centre of the thermometer is a circular glass casing that houses a printed paper dial that records temperature readings on a seven-day cycle. After the seven days, a new paper dial is put in to record the next cycle. The paper dial attaches to a thin metal lever that holds a stylus pen. As the temperature rises, the pen is carried outwards from the centre of the dial and as the temperature falls, the pen is carried inwards towards the centre of the dial. These continuous movements create a complete graph by the end of its cycle. The paper dial is turned by an accurate 24-hour clockwork mechanism that makes a full rotation once every week. The dial on this self-recording thermometer is divided into days and hours by curved radial lines. It is then divided into degrees by concentric circular lines.

The metal lever and stylus in charge of drawing out the graph is constructed with two different types of metal — steel and copper or steel and brass. These metals are bonded together and expand at different rates, subsequently causing a reaction between them. As a result, the lever continuously moves in miniscule amounts based on the temperatures around it, creating dips and peaks throughout the graph.

The Tempscribe Thermometer in our collection was in the middle of its cyclical reading before the clockwork mechanism failed. On this final recording, the single red line that would have created a complete graph ends after about one quarter of its rotation.

Stay tuned for more artifact features on our blog to uncover stories from our museum’s collection.

How to Heat and Cool the Diefenbunker: https://diefenbunker.ca/heatandcool/