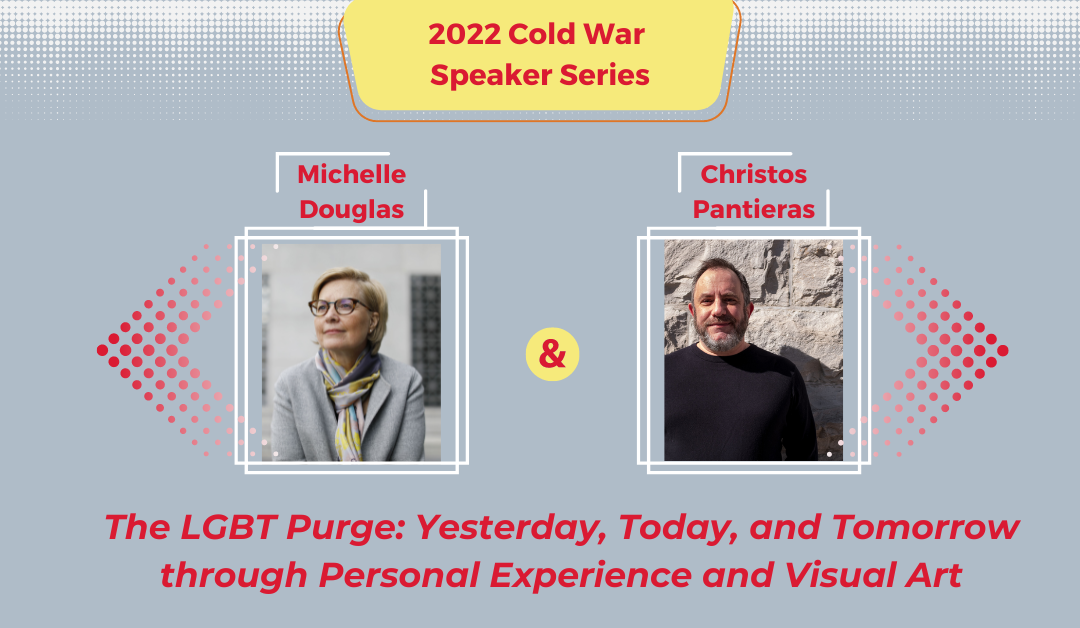 On October 6, 2022, we held the second session in our Cold War Speaker Series, where we were honoured to welcome Michelle Douglas and Christos Pantieras who presented their topic, The LGBT Purge: Yesterday, Today, and Tomorrow through Personal Experience and Visual Art. 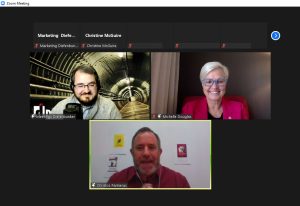 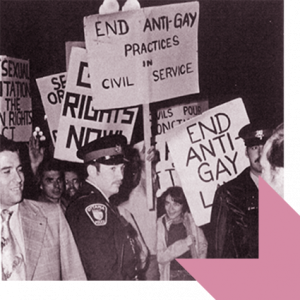 The *LGBT Purge spans from the post-World War II period (1950s to 1990s) and is one of the longest and most harmful campaigns of discrimination conducted by the federal government against the LGBT community. The name “LGBT Purge” was established later on after it became clear how expansive and damaging this campaign truly was. Enacted by a codified government policy of discrimination in the federal workplace, the LGBT Purge grossly impacted individuals who served as Canadian civil servants, RCMP employees, and Canadian Armed Forces personnel. Within these various levels of government, there were de facto policies put in place, which detailed that if an employee was found to be a part of the LGBT community, their employment would be terminated, they would be harassed and discriminated against, and they would face many other unjust horrors as part of the government’s punishment against the LGBT community. By 1986, the military had a shameful and involved policy that was overtly discriminatory — if an individaul was a part of the LGBT community, it was permissable to continue to serve under the condition that said individual would never receive a pay raise, a promotion, or training.

While not many people are aware of the LGBT Purge, for decades, activists have worked tirelessly to bring awareness to this history and to seek justice for victims. At last, the Purge gained higher global recognition on November 28, 2017, when Prime Minister Justin Trueau publicly addressed and apologized for this systematic discrimination. How can victims heal from this inexcusable campaign of discrimination? It is through discussions like this, with individuals including Michelle Douglas and Christos Pantieras, that we can contribute to creating a Canada where the history is known, contended with, addressed, and reconciled so that moving forward is possible. 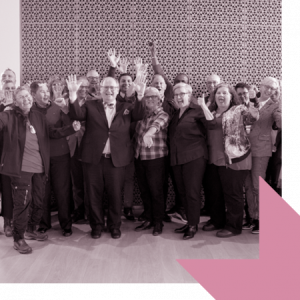 Michelle Douglas is a veteran, a survivor of Canada’s LGBT Purge, and a 2SLGBTQ+ activist. Michelle served as an officer in the Canadian Armed Forces from 1986 to 1989, and, despite being a top military performer, she was honourably discharged under the military’s LGBT Purge, deemed “Not Adventageously Employable Due to Homosexuality.” Michelle launched a landmark legal challenge in 1992 over wrongful dismissal, which ultimately ended Canada’s formalized discriminatory policy against LGBT service memebers of the military. She currently serves as the Executive Director of the LGBT Purge Fund, a non-profit corporation that was established in order to manage the funds received as a result of the nation-wide class-action lawsuit that was launched by LGBT Purge survivors in 2016. Michelle’s experience in the military was the start of thirty years of her social justice and human rights activism. At the time of her discussion for the Diefenbunker’s 2022 Cold War Speaker Series, Michelle was on a cross-country tour talking with survivors and discussing the Purge and its long-term impacts on affected individuals. 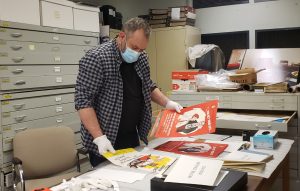 Christos Pantieras is from Ottawa, Ontario and graduated from both the University of Ottawa and York University where he subsequently received his Bachelor of Fine Arts and his Masters in Fine Arts in sculpture. Exploring themes of communication, relationships, and intimacy, Pantieras is a highly regarded artist who has exhibited his artwork in various galleries and institutions including, but not limited to, the Ottawa Art Gallery, The ArQuives, and Modern Fuel ARC. Sourcing online language from emails, text messages, and gay hook-up apps, Christos manipulates the digital world through analog processes. Christos’ work amplifies the resonance of a lost connection while blurring the boundaries between virtual space and physical space. As the Diefenbunker’s 2022 Artist-in-Residence, Christos actively brings the creative arts to a critical period in recent world history — the Cold War.

Justin Case: The Enemy Within

Justin Case: The Enemy Within is an immersive, multi-layered installation that explores the LGBT Purge and the resulting personal struggles of those in the 2SLGBTQ+ community. Christos’ expansive exhibition was inspired by Civil Defence Canada’s comic fictional character Justin Case. After examining the Diefenbunker’s Museum Alphabet and coming across “J is for Justin Case,” Christos quickly began his research. Within three days, this Cold War mascot, whose original purpose was to promote preparedness and safety, had been reimagined as an RCMP Investigator, situated within the LGBT Purge, and tasked with seeking out and dimissing queer people within Canada’s civil service and Armed Forces. His secret? Justin Case is a closeted gay man who turns double agent to secretly destroy evidence against fellow queers.

Justin Case: The Enemy Within is Christos’ most ambitious project to date, where he was able to push his boundaries as an artist. This two-part exhibition commences in the corridor leading to the Bank of Canada Vault on the bottom floor of the Diefenbunker. The “We’re Looking for You Hallway” showcases eight reinvented propaganda posters on either side of the wall. Each poster is created using one of eight colours in the original pride flag and each poster depicts a scene with Justin Case.

Upon entering the Vault, you will step into Justin Case’s office, where he will periodically appear throughout the duration of the exhibition working at his desk, completing correspondence, and destroying evidence. Surrounding you in the space are 9,000 tags, which have all been individually stamped, dipped in wax, and treated in charcoal. Each tag represents an individual who has been directly affected by the LGBT Purge. These sculptural tags represent being labelled — not with names, but with numbers and colours. Red, yellow, and green tags are used, which represent the colours used to categorize individuals within the Purge. Red represents a confirmed homosexual, yellow represents an alleged homosexual, and green represents a suspected homosexual.

There is an audio component to the exhibition that paraphrases Christos’ own words. This personal inner monologue further adds to the immersive and impactful experience.

Christos concluded the discussion by expressing his desire to continue his artistic exploration of the Cold War era and the LGBT Purge. After all, Justin Case does have a partner… Does she also have a secret? We should Bea Alerte, Justin Case. 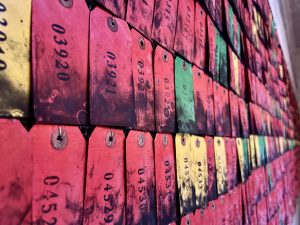 Thank you Michelle Douglas and Christos Pantieras for your enlightening discussion on The LGBT Purge: Yesterday, Today, and Tomorrow through Personal Experience and Visual Art. We are truly appreciative of you both for sharing your personal experiences on this topic and we look forward to seeing the continuation of your extraordinary work in the future.

We encourage you to follow the work of Michelle and the LGBT Purge Fund, and invite you to come see Christos’ work in our new exhibition Justin Case: The Enemy Within that opens at the Diefenbunker this Friday, October 14 and continues through to Wednesday, February 15, 2023.

*History has documented this as the LGBT Purge and it is referenced as such here. We acknowledge that the title “LGBT Purge” excludes direct reference to Two-Spirit, Queer, Non-Binary, and Gender Non-Conforming individuals.

Tune in for our final Cold War Speaker Series session on Thursday, November 17, 2022 at 7:00 p.m., where Dr. Andrew Burtch will be discussing Canada, the Cold War, and the Korean War.

» Register for the Speaker Series

Canada Council for the Arts