‘Dief the Chief: October 62’ a play by Pierre Brault 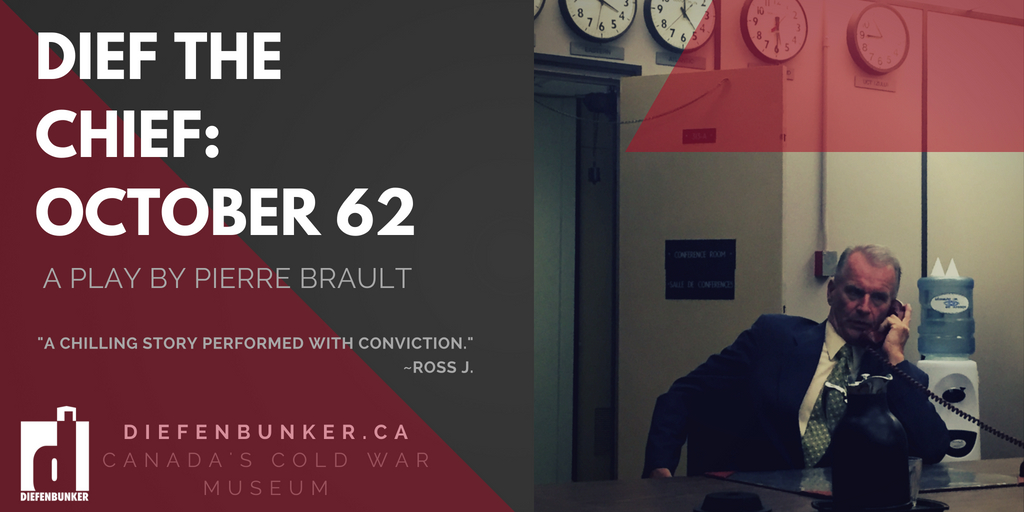 The Diefenbunker Museum and Pierre Brault, Ottawa’s multi award-winning playwright and performer, have come together to create a dramatic and dynamic journey through the life and times of one of Canada’s most progressive leaders – John Diefenbaker. Dief the Chief: October 62 is a play unlike anything you have ever experienced. About the Play: October 1962. A world on the brink of nuclear war! Relive the heart stopping story of the Cuban Missile Crisis through the eyes of Canada’s 13th Prime Minister, John “Dief the Chief” Diefenbaker. Travel with “Dief” through the Diefenbunker, into the war room as he and the world watch the USA and USSR face off in history’s closest brush with nuclear war. Hear in his own words how Dief’s rocky relationship with President John F. Kennedy played an extraordinary role in Canadian/ American relations and how each influenced the other’s policies. This immersive theatrical experience, written by playwright Pierre Brault and performed by Peter Haworth and Pierre Brault, is a unique opportunity to relive history and to play a part in it. Do not miss this experience. Space is very limited so book today. Please note: the play will move around to different spaces and levels underground. Please wear comfortable shoes. There will be very limited seating. Join us in the Vault, after the last performance of each evening, for a beverage (cash bar) and to meet the cast and crew. Tickets: $35 (plus tax = $39.88) Tickets available on Eventbrite: https://www.eventbrite.ca/e/dief-the-chief-october-62-a-play-by-pierre-brault-tickets-47090591226 Dates: Friday July 20, 6:30pm and 8:30pm Saturday July 21, 4pm and 6pm Sunday July 22, 4pm and 6pm Friday August 10, 6:30pm and 8:30pm Saturday August 11, 4pm and 6pm Sunday August 12, 4pm and 6pm Friday August 24, 6:30pm and 8:30pm Saturday August 25, 4pm and 6pm Sunday August 26, 4pm and 6pm About Pierre Brault Pierre Brault is a veteran actor, writer,director, and producer, whose work has appeared on virtually every stage in Ottawa and across Canada. He is best known for writing,performing and touring his multi-award-winning, historically based shows: 5 O’Clock Bells, Portrait of an Unidentified Man, and Blood on the Moon. Rave Reviews:

“I attended the show and I want to say it was most compelling. The script was excellent and acting was powerful. Staging it in the bunker added to the impact as the bunker was built in case such negotiations failed. It is a chilling story performed with conviction. The film clips were used to great effect. This play brought back lots of memories of this period in history and the bits of humour made the characters more life like and made the more serious parts even more chilling. Thanks to everyone who made this play possible. I thoroughly enjoyed it. Bravi.” ~Ross J.

“It was simply fantastic! It was like living through history. Pierre & Peter delivered the serious material (because it *was* serious material) with deadpan humor, nostalgia, sentimentality, and emotion. Take a few moments before (or after) the experience (and it IS an experience) to read a bit about the Cuban Missile (aka. October) Crisis to round out the history you are (or have just) seen. A must see if you can! Great job, Mr. Prime Minister & Pierre Brault. (Also, it feels eerily topical…)” ~Peter L.