Artifact of the Month: The Model 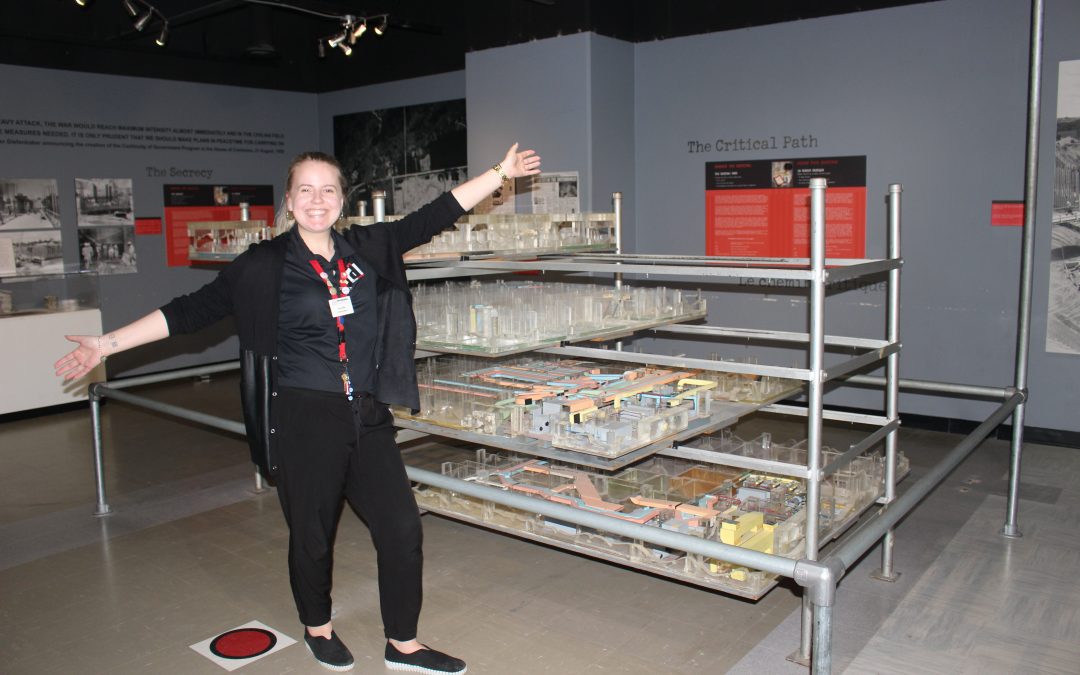 If you’ve ever wondered how exactly the Diefenbunker was built, this is the blog post for you!
Our featured Artifact of the Month is: The Model! 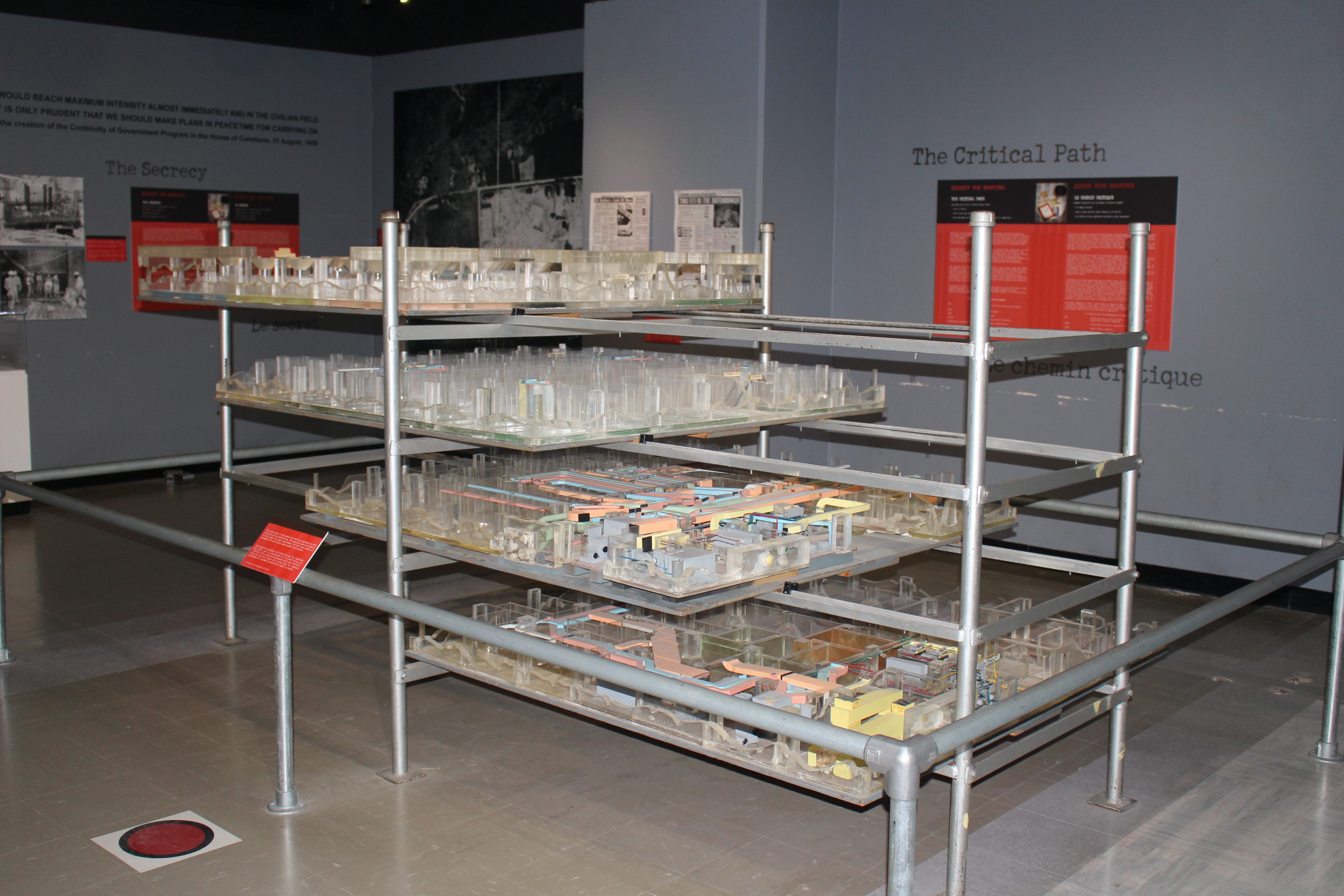 The Model is the original construction model from 1958. Because something like the Diefenbunker had never been attempted before in Canada, they used the model as a map for guiding the layout and construction of the building. In particular, the model was used for mapping out the air ducts, pipes, and other mechanical functions within the facility. 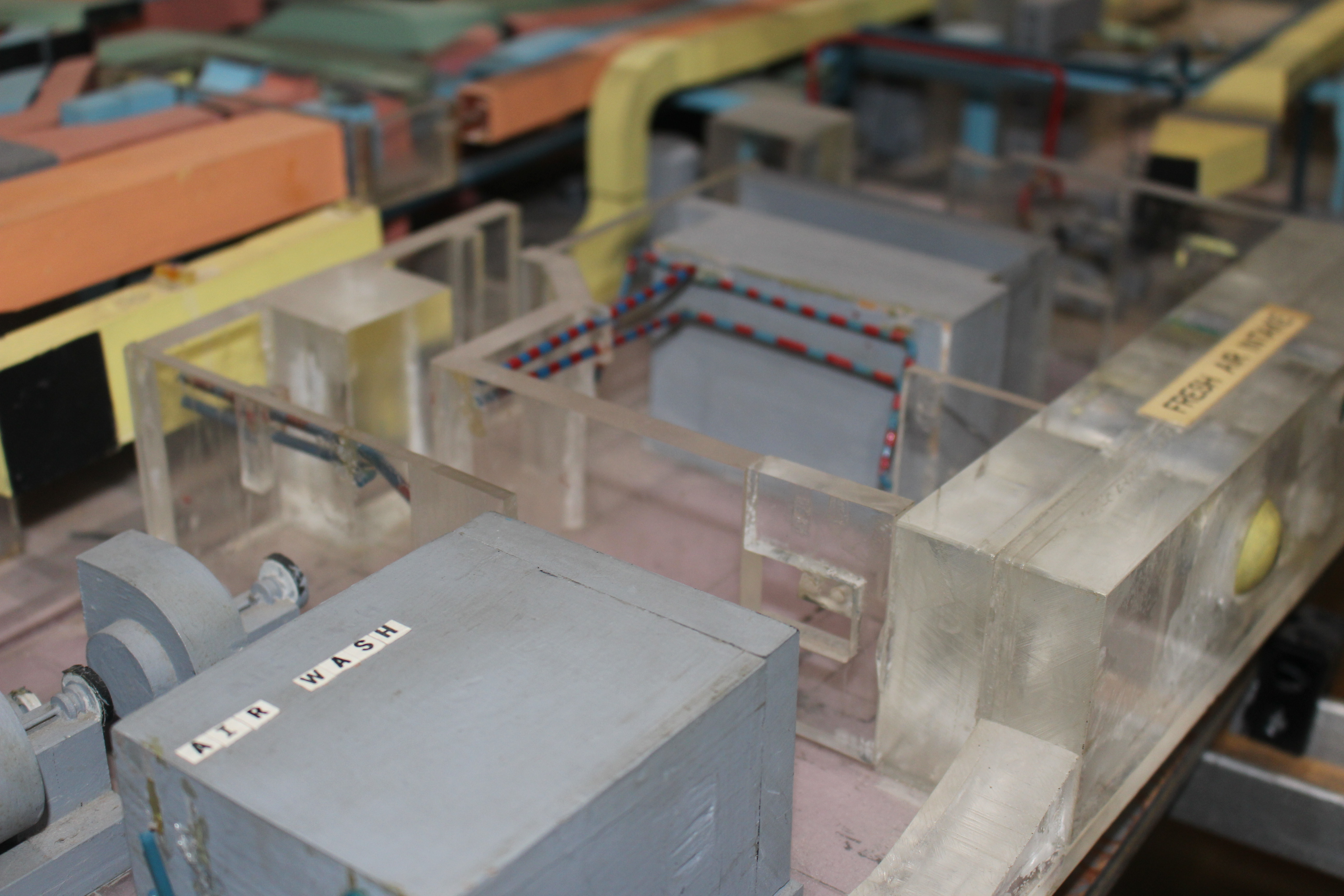 Building the Bunker
There were many challenges that came with planning the Bunker. It needed to be complete in a very short time (13 to 18 months) and it needed to be strong enough to withstand the impact of a nuclear explosion.
In order to accomplish this goal, it was decided that the “Critical Path Method” (CPM) would be used. The CPM is an algorithm for identifying the most efficient path for completing a goal. It creates a step-by-step outline of the plan and identities the critical and non-critical tasks to ensure the time allotted is best utilised. For the task of completing the Bunker, the CPM called for delicate streamlining of the dense flow of materials, use of labour, and installation of equipment. This meant that the model and the Bunker were actually being designed and built at virtually the same time.
Because of the size of the task, Lt.-Colonel Ed Churchill of the Royal Canadian Engineers, and the Foundation Company of Montreal were called in to put the CPM to work and begin planning.

The Layout
The Model itself is made of wood, metal, and plexiglass, and is about 5 feet tall. It consists of 4 levels, representing each level of the Bunker, and sits on a metal body with tracks, allowing levels to slide in and out when ready for viewing. An interesting feature of the model is the scale model versions of the 38 cement pillars that run through the body of the Bunker. 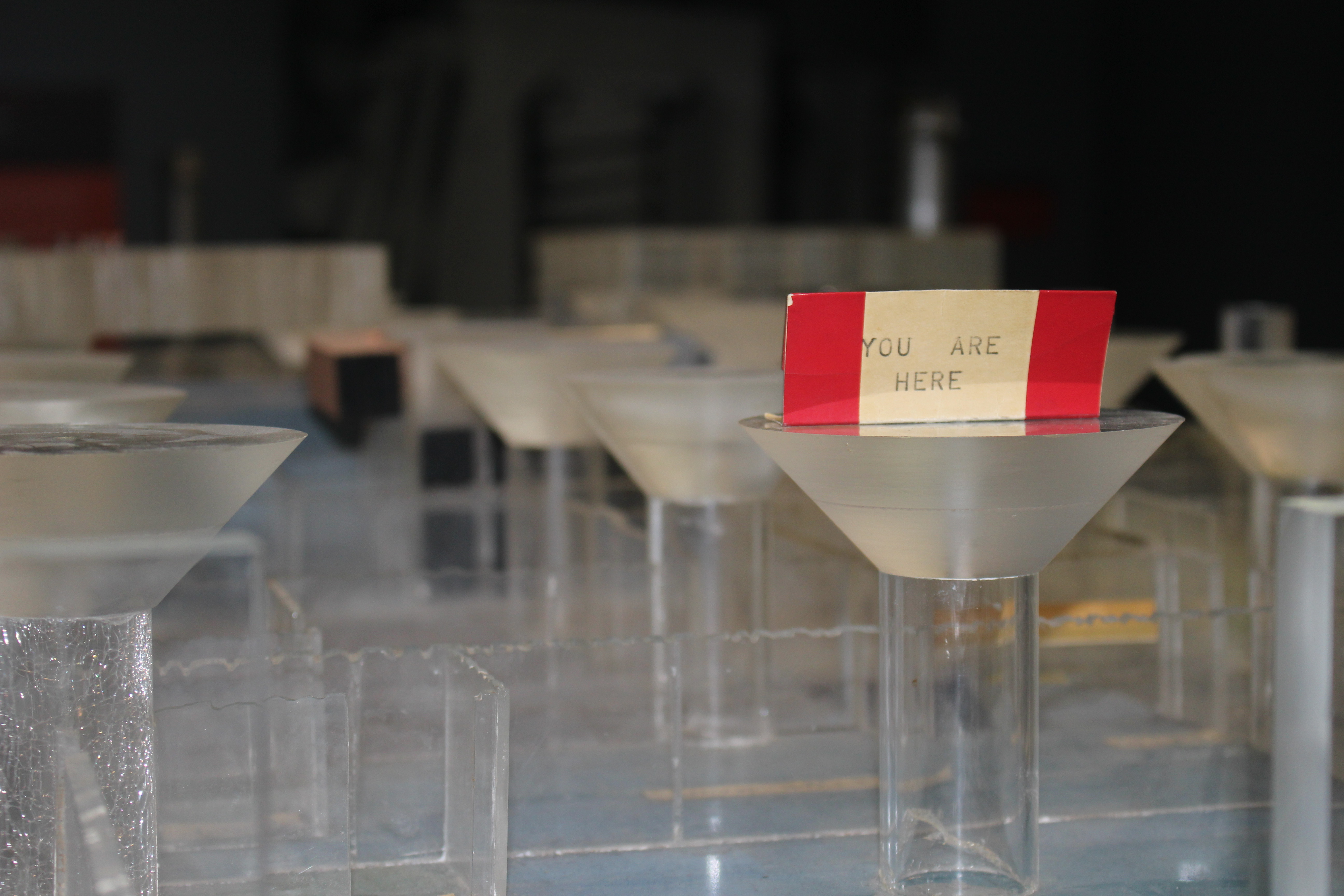 The Bunker is shaped like a cube and this was done for a reason. The structure of the building is intended to have some “flexibility.” It needed to be able to take the impact of a shockwave from a nuclear blast (the Bunker can take a 5 megaton hit from 1.8km away) and the cube would allow this. The entire building is reinforced with as much concrete and steel as a 20-storey building and has 5 feet of compacted gravel surrounding it. The walls are also anywhere from 2.5 feet to 4 feet thick. 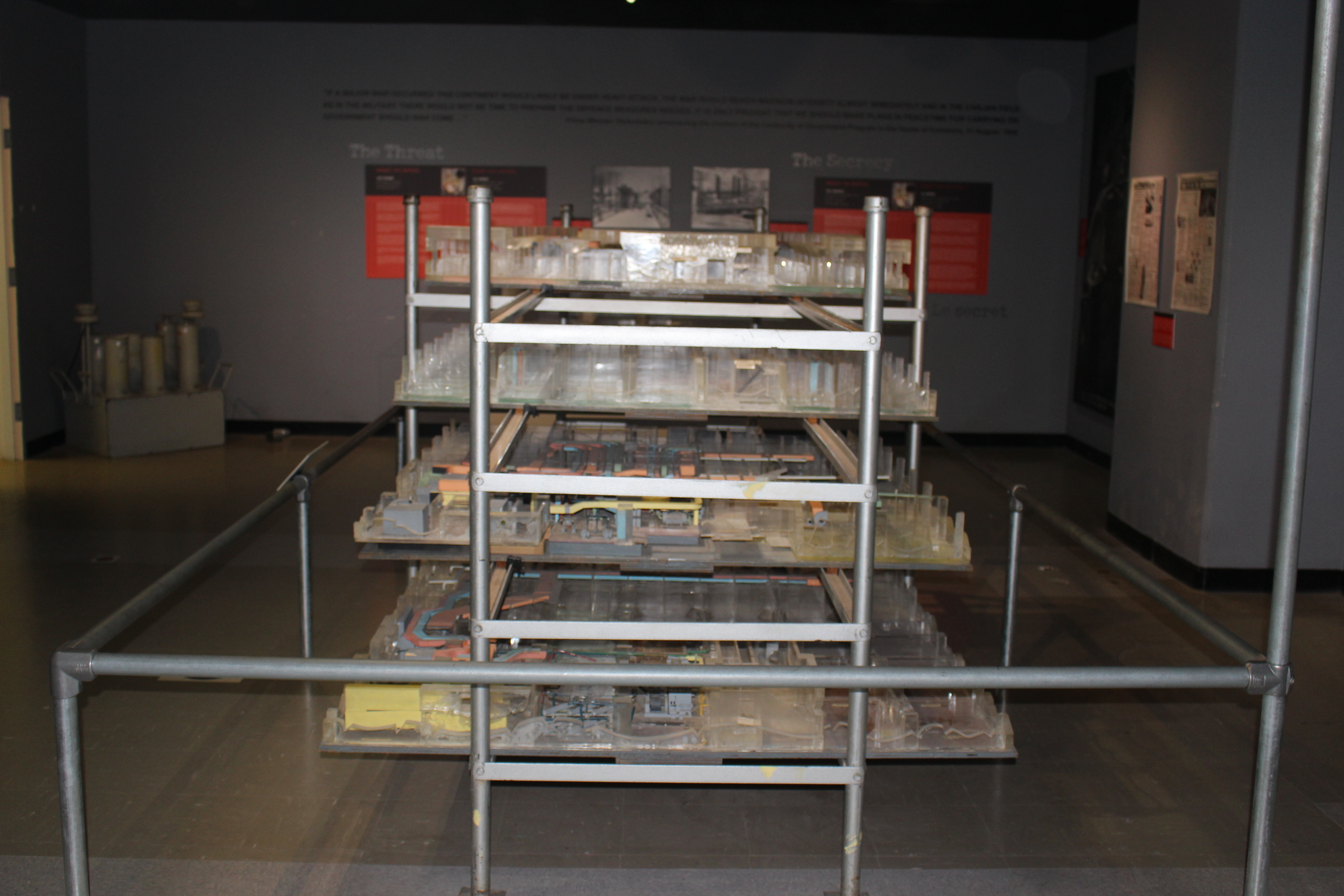 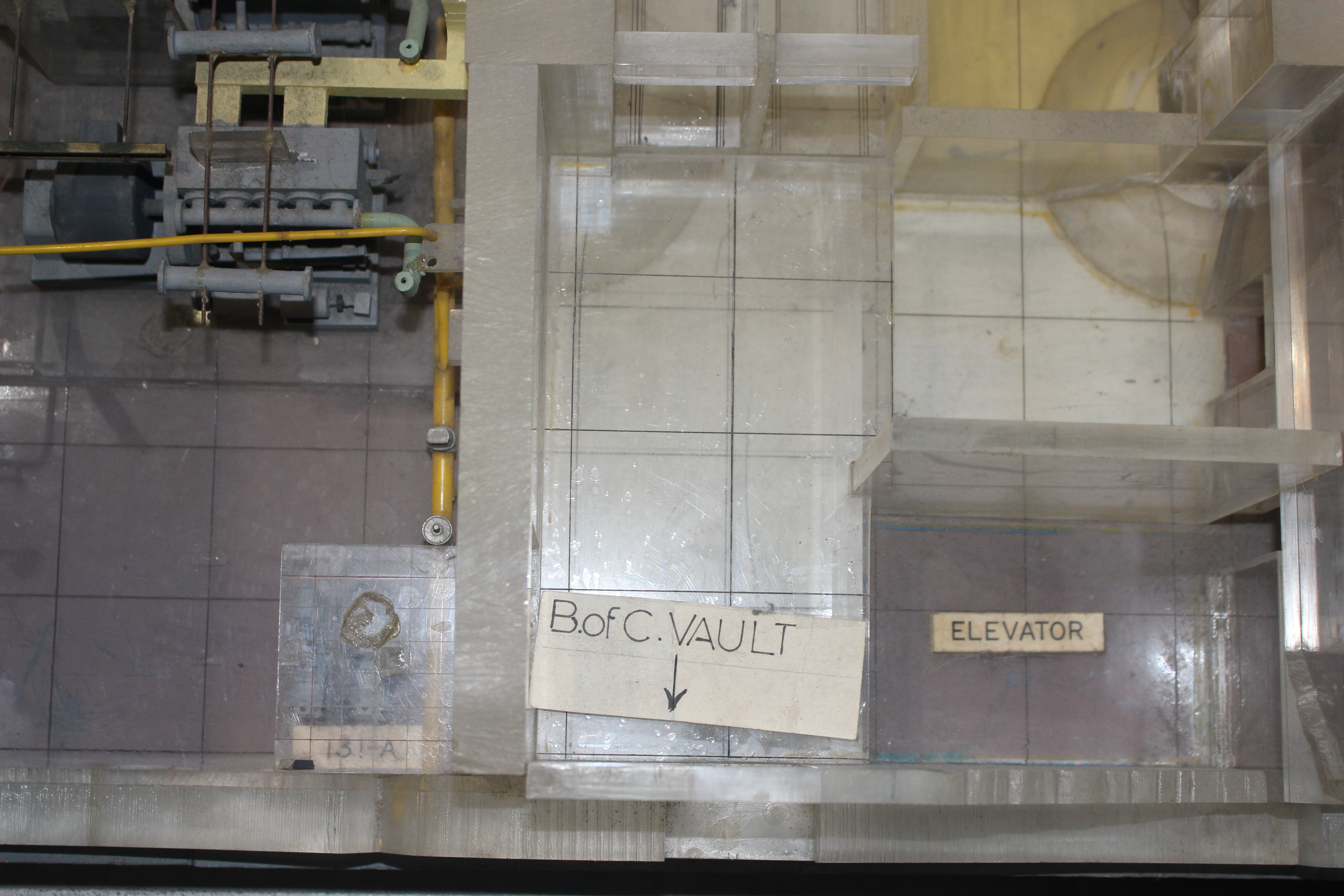 Decommissioned
In June of 1994 the Bunker was decommissioned and stripped of anything that wasn’t nailed down. At this time there was no plan to turn the Bunker into a museum so the Canadian Museum of History (then it was called the Canadian Museum of Civilizations) was allowed to come in and take some original artifacts for their collection. They ended up taking about 16 items, one of which was the model. The model remained at the History Museum for a couple years until it was determined that the Bunker would become a museum itself. The History Museum then brought the model back to be on display inside the Bunker.

Today
Today the model has its own room inside the Bunker. This large red room displays images and artifacts from the construction of the Bunked with text panels describing the process of building this 100,000 square foot wonder. In the centre of the room, illuminated by spotlights sits the original model, where it remains one of our star artifacts. Come and check it out today!! 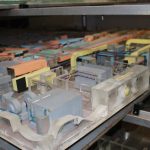 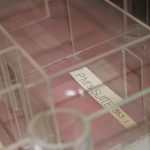 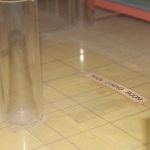 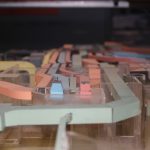